I love the area of Rincón de la Vieja in the north of Costa Rica. It’s old world cattle farming country that happens to have a multi-cratered live volcano in it, along with forest, burbling and spluttering mud pots and several lofty waterfalls and swimming holes. Mainly though, it’s a place where you can stay on a ranch, slow down, ride if you want to, and live a Costa Rican life – for a bit. 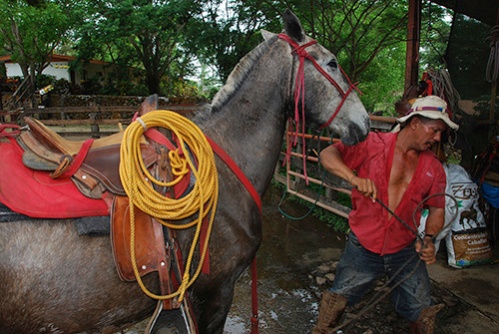 Some years ago I stayed at a very basic farm, and got invited by the family to a dance in a local barn. We drank cloudy moonshine guaro, ate pork and rice, and danced to sabanero songs played by a local band. Old men danced with their grandchildren, mothers with sons, cowboys in striped shirts, jeans, boots and hats with the clod-footed foreigner. All – but me – perfectly synchronised. Lighting was a bare bulb dangling in one corner powered by a car battery. At one point the band stopped and the men formed a circle to sing Guanacaste cowboy songs – hauntingly beautiful, and mournful, in which each took a turn to step into the centre for a – sometimes improvised – wavering solo. Wonderful. 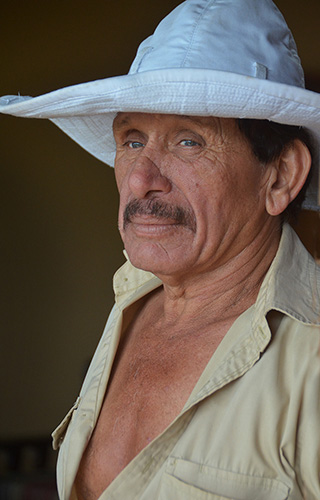 One of the longest-established places to stay is Hacienda Guachapelin, which remains a working ranch. These photos, by old friend Andres Madrigal of CR Traveler, are taken there. You used to be able to see cowboys riding into town on fancy trotting horses with silver stirrups on Saturday nights in the San José suburb of Santa Ana, but it’s Guanacaste that was synonymous with massive cattle ranches, and that’s home to the vestiges of cowboy culture.

There are designated hiking trails inside the Rincon de la Vieja National Park. Sometimes you can hike up to the craters, but I believe currently, you can’t – owning to ‘activity’. I remember crawling along the peak of shifting rocks that formed the lip between two booming craters in fog wondering if it was a good idea. Possibly not. The wildlife-spotting is good: this is one of the only places in the country I’ve seen a giant anteater.

The Rincon area is all about 175km north of Arenal and 225km north of the Central Valley. It’s not far from Liberia, a big, busy town that’s not without its charms. Once you’re into the lime grasslands, you’re in another world. Inevitably, adventure tours have been added to stop tourists from getting bored, but I’d say part of the point of coming here is to make your own fun and / or do nothing.

The horses may be small (they’re cross-breed criollos), but they are as sure-footed as mountain goats, and adept at sliding down mud banks, crossing rivers, and dealing with novice riders. Saddles are Western-style. 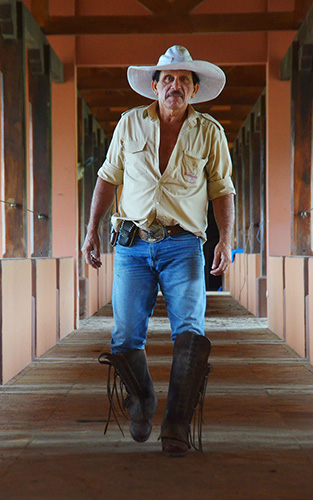